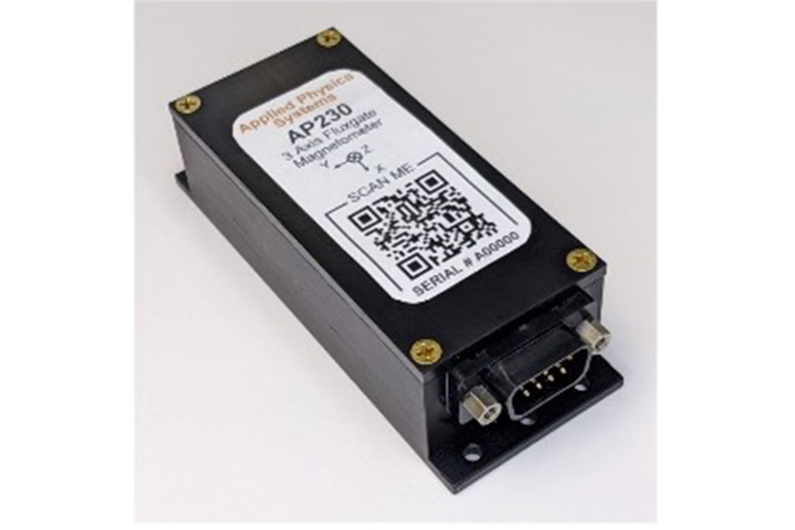 The Applied Physics Systems Model AP230 magnetometer is a scaled down version of the Model 539 for education and research. It is a high-speed digital output 3-axis fluxgate magnetometer that can also measure rotation angle. It is ideally suited to situations where high speed magnetic data must be acquired and analyzed.

The AP230 can convert and transmit over its serial port (at 38400 baud) to all three axes outputs at a rate of 250 samples per second. Slower data rates can also be selected; transmission rate and baud rates are user programmable.

The AP230 simplifies and reduces the cost of the magnetic data acquisition system by eliminating the cumbersome A to D board. The system uses three separate 16-bit sigma delta converters to achieve high throughput. The scale factor is set so that a full scale input of 10-4T (1G) represents 32768 counts on the system Analog-to-Digitals. The least count represents about 3nT. Noise of the system is 1 – 2 counts.

The AP230 can be supplied with an optional connection cable and breakout box which allows easy powering and connection to an external computer. Windows-compatible configuration, data acquisition, and display software is supplied with the Model AP230. This program enables the user to acquire and graphically display data as well as configure the Model 539 send rate, baud rate, output format, and other features.

In addition to the standard RS232 interface, the AP230 is also equipped with a TTL interface for communication with a microprocessor.

Fluxgate magnetometers employ a saturable core driven by a high frequency carrier parametrically up convert low frequency magnetic field variations to sidebands on the carrier. This approach produces a low noise, high accuracy sensor. The magnetometer electronics consist of a miniaturized 3-axis servo system which nulls magnetic field changes applied to the saturable cores. This design produces a very linear response over the entire dynamic range of the system.